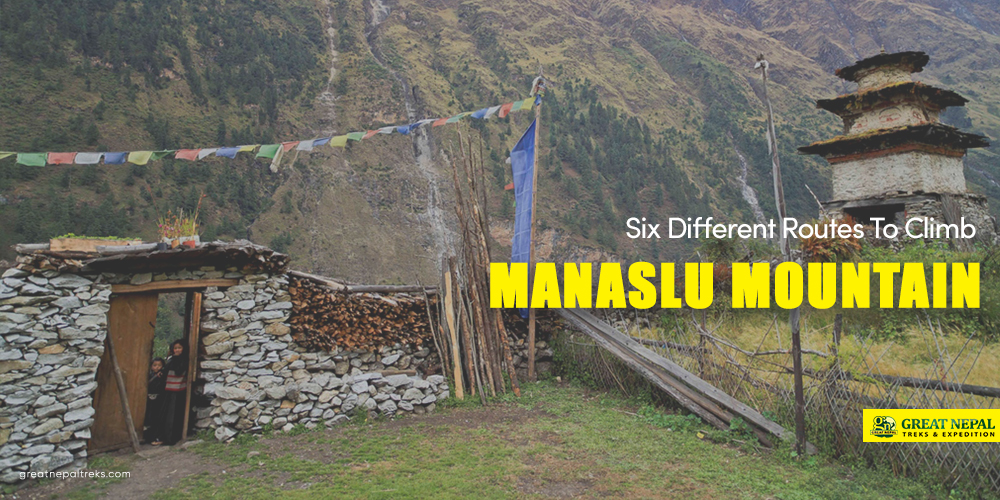 The name Manaslu can be roughly translated to ‘the mountain with the spirit’. Without a doubt, it is a dream mountain for any professional climber to climb. The eighth highest peak in the world was first climbed in 1956, by a Japanese expedition team, and since then, so many mountaineers have tried to climb Manaslu Mountain. Many have succeeded, many others have failed, and quite a few have lost their lives in the process.

Mount Manaslu offers many routes to the climbers to reach the common peak. Altogether, there are six of them –

There is also a sixth route that has been used only once to reach Manaslu Summit by the Joint Services East Nepal Expedition team, a British expedition team, in 1983. They took special permission from the Nepalese Government to use the route to climb Mount Manaslu. Among all the paths that lead to the peak, the northeast face is used mostly. The same route was used during the first ascent. The southern face is considered the most difficult route leading to Manaslu Summit.

Despite the fact that there are six different routes to climb Manaslu Mountain, there’s one route, i.e. the northeast face, which is preferred mostly to climb Manaslu Mountain. However, this doesn’t mean that the route is simple to climb upon. The northeast face is a straight climb from the camp to the peak. There aren’t any challenges on the route, but it’s quite a lengthy and tiresome climb. Once the climbing begins, the mountaineer can’t stop unless he reaches the peak of Manaslu Mountain. Also, the climbers are prone to accidents should an avalanche occurs, as, during the climbing process, they’re totally open and defenseless. In 1972, fifteen climbers and 10 Sherpas were killed due to an avalanche that occurred on this route. The avalanche buried their tent completely, killing all of them.

Manaslu Expedition is a 46 days long journey altogether. The journey starts at Soti Khola. You trek all the way up to Manaslu Base Camp, by crossing villages such as Jagat, Deng, Namrung, and so on. It takes around 7 days to reach here. During that time, you spend one day at Samagaon, resting, acclimatizing, and preparing your body for the climb. From the Manaslu Base Camp, Manaslu Climb begins.

The mountaineers spend around 28 days on the mountain. During this time, they go up and down the structure, from one camp to another, and their objective behind this is to help their bodies acclimatize completely to the high altitude. On the peak, the high-velocity wind blows at all times. So, a lot of their time is spent looking for a window to climb on the top of the peak. When the window is open, they quickly ascend to the top. It is things like these that make the climbing process tougher and lengthier. Within these 28 days, they reach the top and as well as safely descend to the Base Camp.

From Manaslu Base Camp, the climbers trek back to Samagaon and continue walking till they reach the end of the journey at Soti Khola. Altogether, the core climbing is 28 days long, the core trekking is 9 days long, and the remaining 9 days are spent resting, acclimatizing, strolling, riding the bus or the plane, and doing other activities. This is what the Manaslu Expedition is all about.

Manaslu Circuit trek starts from Soti Khola and ends at Syange. It’s a 13 days trek altogether, and the trekkers acclimatize for two days, at two different points – Samdo and Samagaon. During the journey, you’ll cross villages like Dharamshala, Bimtang, Tilje, Tal, and so on. One of the best things about the Manaslu Circuit trek is that it doesn’t just help you explore the entire Manaslu region in one go, but also, bits of Annapurna region, especially towards the end.

So, you go from Manaslu Conservation Area to Annapurna Conservation Area Project, and in the process, you get to soak in all the goodness offered by both sanctuaries. The main attraction, without a doubt, is the mountains. So, apart from the ones in the Manaslu region, you get to enjoy the views of the ones in the Annapurna region like Annapurna, Dhaulagiri, Machapuchhre, and so on. Both the protected areas are known for their huge population of exotic creatures, from animals, birds, insects, reptiles, too many species of plants, you’ll find them all here.

Manaslu Circuit trek also features other natural spectacles like rivers, waterfalls, lakes, glaciers, and most importantly, passes. On the route, you’ll have to cross Larkya La, which is a high altitude mountain pass situated at an elevation of 5160 m. Because of the fact that the route takes you to such high altitudes, the Manaslu Circuit trek is marked as a challenging trek altogether. Apart from the pass, there are many places that take you above 3000 m and makes you stay there for quite some time. It’s crucial that before you go for the trek, you consider things as such.

However, if you want to visit Manaslu Base Camp, you’ll have to head west. It takes one day to reach the camp. The trekkers spend the night at the base camp itself. And on the next day, they return to Samagaon. Once the trekkers have reached here, they could head towards Samdo the way they originally intended. By making this short change to your itinerary, you can make a visit to Manaslu Base Camp.

Needless to say, Manaslu Base Camp is a beautiful place to visit. Completely gray and white setting, surrounded by peaks, and offering the view of mountains like Ngadichuli, Himchuli, Manaslu, and so on, it’s an absolute pleasure to be here. Once you’re here, you’ll realize that all that effort that you made to reach this place this totally worth it.

In the 15th century, a famous Buddhist Saint, who went by the name of Milarepa, came to the valley, and meditated in the hills around the valley. This incident made the people believe that this land is sacred, and the belief still continues. On the trek, the most important attraction that you’ll come across is Mu Gompa and Rachen Nunnery. Milarepa Caves, i.e. the caves where Milarepa is supposed to have meditated, is another attraction of the trek. Tsum Valley trek adds the religious and cultural aspect and importance to the entire Manaslu region.

It is established how tough climbing Manaslu Mountain can be, doesn’t matter what route you choose to take. It takes extreme patience, great amount of skills, and the right judgment for a climber to successfully climb Manaslu Mountain and reach its peak. If you think that you have what it takes to reach the top of Manaslu Mountain, but still haven’t tried the expedition yet, you’re missing out on a major achievement. So, the next time you plan an expedition, how about you give Manaslu Mountain a try. You’d never repent it. The experience and joy are sure to overwhelm you.

2. Tracking The New Trail of Manaslu Circuit Trek After Earthquake

4. 5 Reasons Why Manaslu Circuit Trekking Should Be In Your Bucket List

Great Nepal Treks offers the most popular trekking and expedition packages to anyone who’s an enthusiast. If you’re someone who likes traveling to off the beat places, Great Nepal trek has an exclusive collection of itineraries designed just for you. The company allows travelers to participate in the itinerary designing process. If the itinerary is already designed, you could give your inputs and modify it. The objective behind the process is to involve the travelers as much as possible in the journey and to satisfy them completely by including their places of interest in the itinerary.

Great Nepal treks are reliable and experienced travel and tour operators, and if you choose them as your travel partner, they will leave no stone unturned to ensure that you have the best time on your trip. The agency also offers other forms of travel like mountain flight, helicopter ride, luxury travel, and so on. Their packages feature the most exquisite places in countries like Nepal, Bhutan, and Tibet. Now, if you’re a travel enthusiast, and you’re looking to spend you holidays in the hills and mountains, specifically, if you’re looking to climb Manaslu Mountain, or trek in the Manaslu region, contact Great Nepal Treks today.