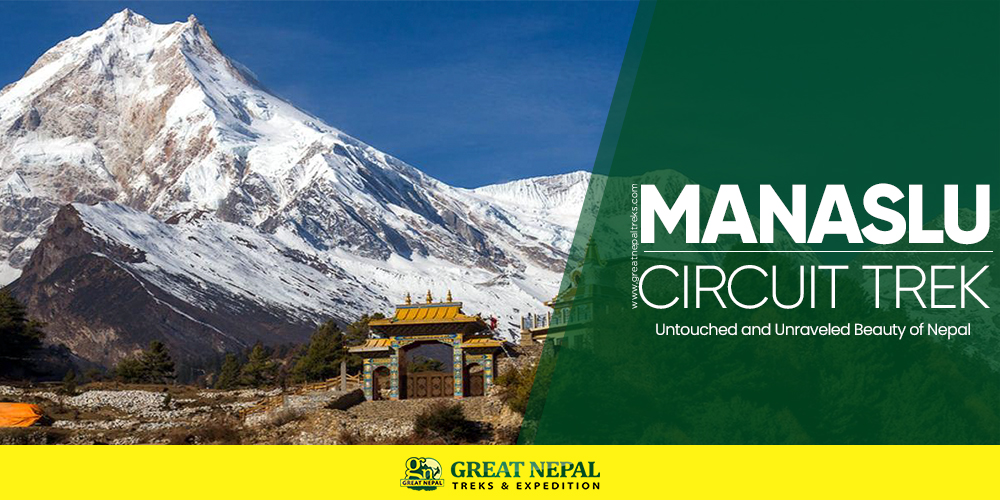 For a very long time, Manaslu region stayed as an untouched and unraveled beauty of Nepal, atleast in comparison to other more popular regions like Everest and Annapurna. It was only very recently that travelers and trekkers started exploring this region, and realized that it’s filled with the most serene locations and spectacles of nature. Manaslu Circuit Trek is a trek route built around Manaslu region that covers major attractions and settlement areas around Manaslu. Its popularity has been growing tremendously, and it seems that very soon it’s going to act as a supplement of the most preferred trekking routes like Annapurna Circuit Trek, Everest Panorama Trek, Ghorepani Poonhill Trek, and so on.

What makes Manaslu Circuit Trek so untouched and unraveled is the fact that for a very long time Manaslu Region, and the surrounding areas was out of the reach of travelers. This was mainly due to the landscape and poor transportation facilities. And even after Manaslu Circuit trek route was established, it didn’t get as popular as other trekking routes. It has all the attractions that one looks for in a trekking route, and despite the fact, it remained unexplored. However, with time, it is gaining tremendous popularity, and very soon, it appears that the route will get over crowded with trekkers.

There are so many things to look forward to in Manaslu Trek. One of the major attractions of the trek is Pungyen Gompa, which is a significant Buddhist pilgrimage site of the region. Another feature of Manaslu trek is Larkya La Pass. It is a high altitude mountain pass that contributes to making the trek challenging. Larkya La Pass is also the highest point of the trek, and is the home to probably the most extreme climate and roughest terrain of the region.

The core trekking journey in Manaslu Trek lasts for a total of 13 days. Trekking starts at Arughat, and ends at Besisahar. The starting and ending points of the trek might differ as per the trekking company you’re going with. One day is assigned for acclimatization, and generally, the trekkers chose Samagaon as their spot. There are multiple side trip possibilities from Samagaon.

One can take a couple of hours of walk up to Pungyen Gompa, as mentioned above, or they could go for a visit to Manaslu Base Camp. The number of days assigned for acclimatization increases if you choose to extend your trip, for instance, by adding Tsum Valley Trek to your itinerary.

Manaslu Trek also offers you up-close and personal views of peaks like Ngadichuli, Himalchuli, Manaslu, Shringi, Ganesh, and so on. There are scenic spots scattered throughout the trekking route, where trekkers can spend some time relaxing and witnessing the presence of these majestic giants.

From Chumling, the route continues straight north to Mu Gompa. From there, it’s the same route back to Arughat, the end of Tsum Valley Trek. If the trekkers want to continue their journey, and go for Manaslu Circuit trek as well, then they would have to head west towards Deng from Chumling, instead of going south towards Jagat.

Before going for Manaslu Circuit Trek, you might need to prepare for it a little bit. Preliminary preparations would include activities like simply finding out about the trip and trying to collect as much information as possible about the journey. The level of information you’d need to gather depends on whether you’re going for the trek on your own, or you’re going through a travel company. Also, to be able to find the right travel partner, you need to research about the different travel companies out there, and compare the features of the package that they’re offering.

Apart from all that, you could do the following things to prepare for Manaslu Circuit Trek.

The first thing that you need to do is get your hands on Manaslu Circuit Trek map, and not just the soft copy, but a real hard copy. Buying the map is a part of the information gathering process, and it’ll prove to be quite advantageous. Owning a Manaslu Circuit Trek map will help you stay updated about the attractions, as in what’s coming next, and better understand the route.

Trekking Gears and Other Essentials

To make your trekking journey comfortable, you need to have things like trekking gears, trekking appropriate clothing, sanitary items and toiletries, medications and other necessary items all set and ready. You can bring these things from home or shop here in Kathmandu. Also, ask your travel partner whether you’ll need to bring additional gears or equipment for the trip as well.

To go for a trek in Manaslu Region, you’ll have to get two kinds of permits. The first one is called TIMS, which is given by Trekking Association, and the second one is the Manaslu National Park permit, which can be collected at the entry of the park. And to get your hands on these permits and entry passes, you’ll have to pay a nominal amount of fees. Now, if you’re going with a travel company, they’ll take care of the fees and permit for you. Else, you’ll have to work a little harder and get them yourself.

Manaslu Circuit Trek route suffered a great loss because of the earthquake that occurred in 2015. Trekkers got quite skeptical about trekking in the region, probably due to safety concerns, and due to this, the revenue that the region earned from trekking dropped significantly. Also, the route suffered serious damage due to the landslides caused as a result of the earthquake. The routes were either blocked with debris or rubbles, or they were swept away completely. The settlements, on the other hand, were also destroyed. Certain villages even got leveled and disappeared from the map.

It’s been 4 years now, and at the moment, Manaslu Circuit Trek after Earthquake is completely safe for trekking. With the continuous efforts of the locals, everything came to order. The routes were re-established, the villages were rebuilt, and even the promotions started, where the trekkers were invited to try out the trekking route, claiming that the routes were totally safe for trekking. When you go for the trek on Manaslu Circuit Trek route, you’ll find absolutely no signs of the earthquake, except the monuments and stone structures constructed to honor the dead.

To get more details about Manaslu after earthquake, about its changes on route and tourism, you may refer to this article: Tracking The New Trail of Manaslu Circuit Trek After Earthquake

Trekking in Nepal is one of the most popular activities to do in Nepal as tourists from across the globe come to here every year to walk on its rough terrains and witness its natural beauty. It is also one of the best ways to explore Nepal as while trekking you get enough time to stay close to the nature, and among the indigenous people who live in the hills of the country. The locals residing in their beautiful settlement areas, co-existing in a setting away from man-made reality, will give you the best memories.

Manaslu Circuit Trek is one of the best trekking options for you if you’re looking to try something different. It has everything that the other more popular trekking routes have, and on top of that, since it’s not as jam packed with tourists, you’ll fell more closely connected to mother nature. Without a doubt, Manaslu Circuit Trek is an untouched and unraveled beauty of Nepal, still waiting to be explored up to its full potential. And considering its rising trendiness, the day doesn’t seem that far away.

Great Nepal Treks is one of the most amazing travel companies when it comes to trekking in Nepal. With our experienced guides and travel experts, we offer the best quality trekking services in Nepal. Our trekking packages cover the most exciting and interesting trekking destinations in the country. So, if you’re planning to go for trekking in Nepal, and especially on Manaslu Circuit Trek, choose us as your trekking partner. We’ll offer you the best service at the most affordable price.