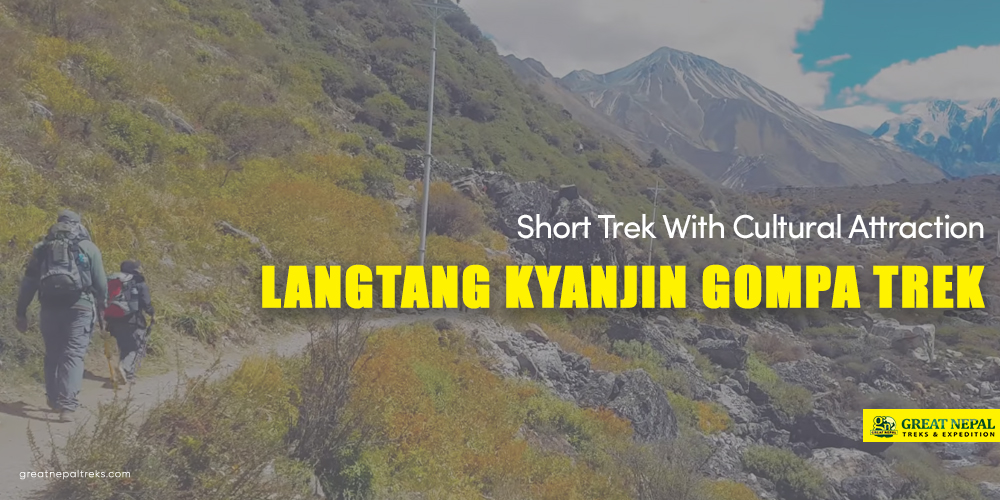 Langtang Kyanjin Gompa Trek takes you to Kyanjin Gompa, which is one of the most significant Buddhist pilgrimage sites of the region. It is regarded highly by the Buddhists of the region, and they make sure that all their celebrations and mournful events happen here. Kyanjin Gompa is actually a settlement area, with a monastery in it that goes by the name of Kyanjin Gompa. Apart from the gompa, there are so many households and businesses that thrive in the area.

Langtang Kyanjin Gompa Trek is also known as Langtang Valley trek or Langtang trek simply. Altogether, it’s a trekking journey with 6 core trekking day. On one specific day, the trekkers rest to help their bodies acclimatize to the high altitude. During the trek, the travelers visit villages such as Bamboo, Langtang, Lama Hotel, and so on. Langtang Kyanjin Gompa trek starts from Syabrubesi and heads east towards Kyanjin Gompa. From here, it’s the same way back to Syabrubesi, where the journey ends.

Ganja La is a high altitude mountain pass situated at an elevation of 5122 m. By adding around 6 days to your Langtang Kyanjin Gompa itinerary, you can cover this attraction. It is considered to be one of the toughest parts to walk upon and cross in the entire region, so you could experience certain difficulties in the journey. By trekking on the Ganja La route, you’ll also get to visit new villages such as Keldang, Yak Kharka, Tarke Gyang, Sermathang and Melamchi.

Gosainkunda, on the other hand, is a high altitude complex of mountain lakes. Altogether, there are 108 lakes in the region. Gosaikunda is a major pilgrimage site for the Hindus, and every year, in the month of August, pilgrims from all over the world visit the lake, and pay their homage to the Hindu deities – Shiva and Parvati. The lake remains frozen for around 6 month in a year, i.e. from the month of October to March

Tamang Heritage trail is a journey through which you get to explore the life and culture of Tamang people. Tamangs are among the many indigenous tribes of Nepal who have been living here for centuries. They have a separate identity, with their own traditional dress, language, food, and so on. On the trek, you get to live in their houses. There is no better way to understand these people. The trek gives you not just a social insight into their lives, but a personal one as well.

During Tamang Heritage Trail trek you’ll come across villages such as Gatlang, Thuman, Rasuwagadhi, Briddim, and so on. Altogether, the journey consists of 6 core trekking days, and it starts and ends at Syabrubesi. As the route always keeps you below 3000 m, there are no days assigned for acclimatization. And because the route is so simple to be walked upon, it is ideal for trekkers of all age groups, fitness level, and especially for first time trekkers. Also, it’s the perfect one for you if you’re into world cultures.

The trek is also pleasing aesthetically, as you’ll make your way through beautiful forests of rhododendron and magnolia. On the trek, you’ll come across speeding rivers, giant waterfalls and lakes, with crystal clear water flowing in them. All these elements will definitely make your trek soothing. It’s definite that you’d not just gain appreciation towards the Tamangs but also the nature altogether. It’s amazing to see how these people have learned to co-exist among the forces of nature.

By adding three days to the Langtang Kyanjin Gompa trek, the trekkers can climb Yala Peak. Yala Peak is yet another mini mountain in the region with an altitude of 5732 m. Despite the fact that it has a low height, climbing the peak could be tough for certain trekkers. Needless to say, along with the challenges, the peak also brings a certain level of excitement to the journey. From the top, you can have the most amazing views of the entire Langtang region especially that of peaks like Shishapangma and Gangchenpo. From Kyanjin Gompa, it takes one day to reach Yala Peak Base Camp. The next day, the trekkers attempt to climb Yala peak and reach the top. They also descend on the very same day. And finally, on the third day, they return to Kyanjin Gompa. The rest of the journey is exactly the same as Langtang Kyanjin Gompa trek, i.e. from Syabrubesi to Kyanjin Gompa, and the same way back.

Langtang Trek is one of the most photogenic trekking routes in Nepal. It has everything that you would wish to have in a trekking journey. From all sorts of natural beauties to human elements, you will find everything here. Generally, photographers struggle to get influenced during a photographic journey; they find it hard to get the right shot, but such is not the case with Langtang trek. During the journey, you will have so many opportunities to click the best Langtang photos. The only question is – Would you be satisfied with the number of photos that you click? It’s definite that you’d want to click more and more Langtang Photos, once you’re here on the route.

Langtang Trek is a part of Langtang National Park, and needless to say, for anyone who’s an enthusiast of nature photography, a national park is a heaven. And we’re not talking about just any national park, but the one that is among the richest protected areas of Nepal, with so many species of birds and animals. If you look hard enough, you’re sure to find animals like Red Pandas, Himalayan Bear, Blue Sheep, and even Snow Leopard lying around. Comparatively, birds like Red Billed Chough, Himalayan Pheasant, Snow Cock, and so on can be more easily spotted than animals. Clicking the photos of these creatures, and including them in your Langtang Photos collection will be a great accomplishment.

Great Nepal Treks has been providing travel related services for many years now. They offer helicopter rides, mountain flights, trekking and expedition packages, luxury tour packages, and many other forms of travel and tour itineraries. Because of their years of experience in the field, they are able to offer exciting services at a very affordable cost. Their packages feature the most popular, and as well as off the beat destinations from countries like Nepal, Tibet and Bhutan. If you’re someone who loves trekking, and wants to come to Nepal for Langtang Kyanjin Gompa trek, Great Nepal Treks could be a great travel partner for you. With the best quality trekking related services, and 100% customer satisfaction rate, they will leave no stone unturned to make you feel the best. If you’re someone who seeks active participation in designing the itinerary, you’re in the right place. Great Nepal treks believes in giving the power in the hands of the customer. So, you can pick your favorite attractions to be covered in the trek.