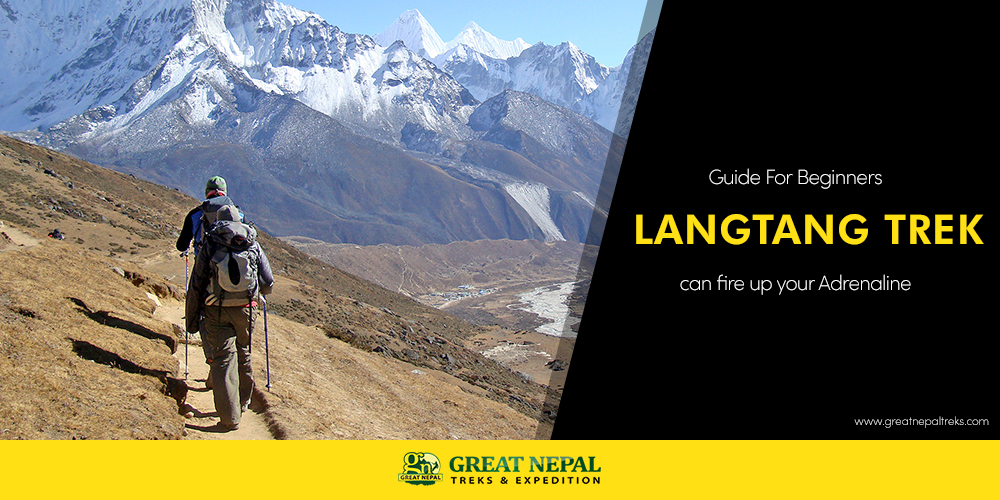 The sublime views of the magnificent Manaslu, Annapurna and Ganesh Himal, the journey on the crisscrossing hilly roads often intersected by rivers and waterfall, climbing as high as 5000 meters to the top of Tsergo Ri! Is it possible for a first time trekker to take on all of these! Well, why not?

Nepal is quite famous around the world for its scenic and adventurous trekking routes. We have all kinds of routes; from short and easy treks to long and strenuous ones. There are routes like Ghandruk Trek, which is only a 3 to 4 days trek, anyone with an average fitness level can embark on it. On the other hand, there are treks like Kanchenjunga, a 22 days long trek that demands an expert trekker to walk on its paths. There is something for everyone here, when it comes to trekking.

Langtang Trek happens to be among one of the country’s most popular treks, because of all the excitement that it delivers but in an easy setting. So, a lot of trekkers, of different age groups and abilities tend to give it a shot, and emerge successful. The attractions mentioned above are few of the many that make up the larger Langtang Trek, and to experience all that you don’t need to be an expert.

So, if you’ve never tried trekking, but would like to try it out during your next vacation, well, Langtang Trek could be an excellent choice for you. It has so many things to offer to you, allowing you to explore nature, culture, and history at its best that is sure to leave you astounded. The experience will definitely make the best impression of trekking in you, if you’re a first time trekker.

THINGS TO KNOW ABOUT LANGTANG TREK

Few of the most important attractions of the trek are the villages that you’re going to stay in, and the people living in them. You’ll get to experience the lifestyle of the local people here. You’ll realize how difficult their life is and despite the fact, they’ll always talk to you with a smile on their faces. The people of the region are mostly Buddhists and they prefer visiting Kyangjing Gompa, a major religious heritage of the region, during festivals and special occasions.

Langtang Trek is one of those evergreen trek routes that can be walked upon throughout the year, except during rainy season and extreme cold weathers. But the best time to trek in the region is between September and November. During this time mainly, the skies are all clear, which makes it possible for the trekkers to have amazing views. The months between April to June is the second best time to visit the region, but the views may get disrupted due to the excessive number of clouds.

The trek starts from a beautiful village called Syabrubesi, which is situated at an altitude of 1550 m. This is the lowest altitude covered in the trek. The highest altitude that you’ll reach is 5000 m, which is the elevation of Tsergo Ri, a mini mountain. The exploration of this peak is conducted from Kyangjing Gompa, another major destination of the trek.

The entire Langtang Trek route is around 70 km long, with an exception of the side trip to the top of Tsergo Ri. The side trip may or may not be included in the trip as per trekkers’ preference.

Langtang Trek is one of the most affordable trekking routes in the country. The cost might differ depending on the kind of trek that you go for. Going for a tea house trek is going to be more expensive than going for camping trek. Similarly, going on the trek on your own will be more affordable that going with a travel company. But it goes without saying that tea house trek and a trek with a travel partner is more comfortable than the other two options.

When you pay for the trekking package, you sign up for a hassle free tour. The fees for all the food, accommodation, medical supplies, porter charge, permit charge, and many other things is included in the overall package cost, which as mentioned above is quite affordable.

PREPARATION FOR THE TREK

Langtang Trek is definitely one of the best things to experience, and as much as you’d love being surprised during your journey, it is recommended that you take care of certain things before going for the tour. Preparation for the trek is a must to avoid mishaps, and make things easy.

Make sure to go through the map of Langtang Trek route, and if possible, have a physical copy of it during the trek. This will help you understand the trek better, and you’ll be prepared for all the attractions on the way, so that you can enjoy them fully. The map might also prove to be helpful, in case that you get separated from your group, the chances of which is highly unlikely.

To trek on Langtang Trekking Route you need to have two kinds of permit. The first one is Trekking Permit, also known as TIMS permit, given to all the foreign nationals trekking in Nepal. And the second one is called the Langtang National Park Permit, which is given at the entrance of the National Park gate.

As mentioned above, you need to hassle for the two permits only if you’re trekking on your own. If you’re traveling through a trekking agency, all the expenses would be included in your package cost.

It is always a good thing to carry your own trekking essentials and gears, especially if you’re a trekking enthusiast. From the right kind of bags, appropriate clothing and warmers, water bottles, shoes, the trekking sticks and so on. If you can bring them from your home country, it’ll be amazing. You can even buy them in Kathmandu, or in Syabrubesi, the starting point of the trek route. But you might have a pay a little bit extra, and there may not be any room for bargain.

The Earthquake of 2015 took a major toll on the socio economic condition of Nepal. It particularly affected the area of trekking in Nepal, as numerous villages that functioned as pit stops and offered the weary trekkers accommodation, food and other facilities got wiped out completely. One of its example is Langtang Village, which got completely leveled. Not just that, even the trekking routes sort of faded away, or got blocked due to a number of landslides caused as a result of the earthquake. For quite some time, the number of tourists visiting Nepal dropped significantly, and so did the number of trekkers willing to explore these regions.

But all this was 4 years ago. Things started changing right from 2016 itself. The people started building back the villages and the trekking routes were slowly cleared. Langtang Trek route in 2019 is completely open for trekking, with everything re-established to its full potential. For the past one or two years, the number of trekkers have almost doubled, in comparison to the time before the earthquake.

So, if you have even the slightest of doubts, caused due to the earthquake, about trekking in this region, well, you’ll be happy to know that there is absolutely no trace of the earthquake here. You could try this trek, without any fear of the possibility of any such calamity.

Langtang Trek is one of the best ways to experience trekking in Nepal, especially if you’re a first timer. Trekking on this route will give you an overall gist of what trekking in Nepal has to offer, and you’ll never even have to break a sweat in the process of exploring the region. Make sure you go with proper trekking guide. Trekking guide will not just tell you the things that you need to do during the trek, but also the ones that you’re meant to avoid. He will help you have the best experience, by showering you with all the knowledge about the settlements that you visit, or the natural spectacles that you come across