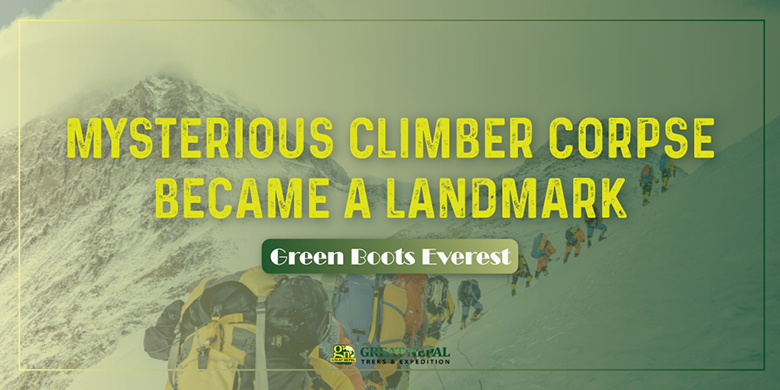 When it comes to reaching the top of Mount Everest, a lot of people generally think about the views from the top of Mount Everest, or the pictures of Mount Everest. Rarely do they think about challenges, health hazards and death. A lot of climbers have gotten badly injured in terms of climbing Everest, and similarly, a lot of them have lost their lives. There are so many facts and fictions revolving around the deaths that have occurred on the peak, but the most popular one among them is that of a mysterious climber, whose corpse became a landmark on Mount Everest. This mysterious dead body is famous by the name Green Boots Everest, and almost every climber who climbs on the peak, comes across it.

In 1996, an Indian climber that went by the name Tsewang Paljor got lost in Everest, in terms of climbing the peak. Years later, his body was found on the northeastern ridge of the peak, or that’s what the search party thought, that the body belonged to him. The corpse had a pair of green boots on it, and as a matter of fact, that body had been lying there mysteriously for so many years. Because of the color of the boots, the body had been named Green Boots Everest. Even today, a lot of people believe that the body belongs to Paljor, but there are other theories that speculate that the body is actually not his.

Green Boots Everest was first spotted in the year 2001. At that time the Sherpas believed that the body belonged to a Chinese Mountaineer, who died around 6 months back. Later, it was found out that the corpse actually belonged to someone who died in the year 1996 as a result of the Everest disaster, an avalanche that killed eight climbers on the peak. It was speculated that Green Boots Everest was in fact Tsewang Paljor, who was a part of the first Indian expedition team, attempting to climb Everest.

The Indian team consisted of 6 members, and though other Indian teams had conquered the peak before, they were the first one to attempt the climb from the eastern ridge. The team was caught in the blizzard during the climbing process. Three out of six people decided to return because the storm appeared deadly, whereas the other three, which included Paljor, were resilient, and decided to go further and reach the peak by any means. As the rest is history, all three of them lost their lives.

Because of the bad weather, the condition that caused their death is unknown. There was a Japanese expedition team at the same time on the peak, who spotted them resting around 150 m blow the summit, but they were not sure if they were the same men, as the visibility was poor. Apart from Paljor, the two other men who died that day were Dorje Morup and Tsewang Samanla. In an article published in The Himalayan Journal, it is claimed the Green Boots Everest is actually Dorje Morup.

Despite the claims made by different parties, it can’t be said for sure who exactly is Green Boots Everest. In the year 2014, the corpse of Green Boots Everest was reported to be missing from its original position. They’d started believing that probably the body got buried under the snow. Then in 2017, a body was spotted hanging on the cliff. It was speculated that the body was Greet Boots Everest itself, transported from its original position to this part of the ridge. Though it was hard to be sure overall.

Everest Rainbow Valley, which is also famous by the name Everest Graveyard, is a part on the northern cliff of Mount Everest. The area is full of dead bodies of climbers who attempted to climb on to the peak, but perished, either in terms of ascending or in terms of descending from the peak. The reason why it’s called Everest Rainbow Valley is because all those corpses are full of colorful jackets that the climbers wore during the time of climbing. As the bodies don’t decompose at such an altitude, they have retained their shape, with those jackets still intact on them. These colorful clothing give a rainbow like impression to anyone who looks at the cliff from a distance. Due to this, it’s been given that name.

Everest Rainbow Valley is a part of Everest Death Zone, which is an area above 8000 m on Mount Everest. The reason why it’s called the death zone is because maximum deaths on the mountain happen at this level. Here, the density of oxygen is too low, requiring the climbers the carry supplement oxygen, and the weather is too cold and unpredictable. If the mountaineers are careless about their approach, it could result either in their demise or extreme level frostbites that are beyond treatment. It is therefore recommended to approach death zone, and the segments like Rainbow Valley, with extreme caution.

In the year 1998, Francys Arsentiev became the first American woman to scale Mount Everest. Unfortunately, in terms of returning to the base camp, she collapsed and succumbed to her death. Rescuers were sent to bring her back, but because of extreme cold, almost her entire body was badly frost bitten, and she was barely alive. The weather was too bad, and even the rescuers’ lives were at risk. So, in order to save themselves, they had to return without her. The legend of Sleeping Beauty Everest is saddening and as well as horrifying as it shows us the true face of Everest.

Before you go for Everest Expedition, it’s crucial that you research properly about the journey and the challenges that might come your way. The Everest Base Camp Stories such as that of Everest Green Boots, Everest Rainbow Valley and Sleeping Beauty Everest make it quite clear. One thing that you must know before going on Everest Climb is how long does it take to climb Mount Everest.

So, to answer the question, how long does it take to climb Mount Everest, altogether it’s a 64 days long journey, out of which, the core climb lasts for a duration of 44 days. Everest Expedition journey also includes Everest Base Camp trek. The climbers spend around 11 days, walking from Lukla to Base Camp before the ascent, and take the same route back after the descent.

Needless to say, Everest Base Camp trek difficulty level, in comparison to Everest Expedition, is like a piece of cake. However, on its own, it’s considered as a moderate level trek. Everest Base Camp trek difficulty level should be considered seriously before embarking on the journey, as it is not meant for everyone, especially the ones with health conditions, or the first time trekkers.

If your intention behind climbing Mount Everest is just to enjoy the views from the top of Mount Everest, or to get a couple of pictures of Mount Everest, well go ahead, but make sure that you take a very matured approach towards climbing. A mountaineer looking to climb the peak must have gone through intense training, and gained significant amount of experience in climbing mountains. Elements like Everest Green Boots tells us what could the situation turn into, if the climber is hasty and reckless about making decisions. If you don’t have such skills and experience, it is better that you don’t go for it. Instead, try any of the Everest Base Camp Tour options. Everest Base Camp Tour give the tourists utmost enjoyment, meanwhile taking them close to Everest.

You might not want to miss our blogs on Everest :
– HOW IT FEELS LIKE TO GET THE VIEWS FROM THE TOP OF MOUNT EVEREST
– HOW LONG DOES IT TAKE TO CLIMB MOUNT EVEREST | EVEREST EXPEDITION

Great Nepal Treks is one of the most amazing travel and tour operators in Nepal that offers the most exciting expedition and trekking packages in Nepal, and in countries like Bhutan and Tibet, which includes Everest Expedition and Everest Base Camp trek. They are experienced, affordable, and what makes them stand apart from others is their dedication towards achieving customer satisfaction. They have the most trusted expertise working for them, which includes talented guides and Sherpa. They will ensure that your trip is not just hassle free, but safe and full of fun as well.

If you’re into mountaineering and trekking, then choosing them as your hiking and climbing partner is the best thing that you can do for your upcoming holidays. With Great Nepal treks by your side, you can be rest assured about having the best possible time during your trekking and expedition journey. You’d want to opt them again.